Sustainable agricultural intensification has to drive overall development of sub-Sahara African countries. Demand for food will continue to grow with the rapid population increase in both rural and urban areas. With more than half of the population below an age of 20 years, food availability and supply chains should be tuned to these markets and conditions. Because soils, the production base for agriculture, in sub-Saharan Africa are nutrient poor, nutrient supply should be specific to soil and plants and in tune with water management and other agronomic practices.

Introduction to the theme by our moderator, Saskia Visser (Wageningen Environmental Research)

Whom are the addressees of our talk tonight? Youth is defined as people from an age between 15 and 25 (UN), while some institutions include those up to 35. In Sub-Sahara Africa the median age is lower than 20. The total population will rise from 1 billion in 2015 to 2.5 billion in 2050, and 3.5-4.5 billion in 2100. Something has to be done with and for this younger generation who is willing to work – but without the availability of suitable jobs, problems may arise ranging from mass migration till the development of an ‘angry young generation’.

However, limited scientific knowledge is available about the developments within this generation, most information is anecdotal. Some information we do have pertains to unemployment and youth unemployment, and migration both from rural to urban areas as well as international migration. Youth are constrained: they do not have land and are dependent on complex social networks. Agriculture does not have much prestige; it is not an ambitious choice. In policy, youth has not featured as a specifically targeted group such as women through gender policies, hence with no focus on youth employment. Assuming that young and strong (wo) men easily find a job, there is more focus on widows, orphans, but not on unemployed youth.

There are development trends specific to SSA that we have to consider in devising youth employment. Landholdings are increasing, which in itself is a world-wide trend, but the different is that half of the expansion to medium farms emerges from expanding small-holders, while the other half is due to land investments by urban professionals from non-farm income and increasing foreign investments. These non-farm owners possess already between 5–35% of total agricultural land.. So in SSA we see the number of medium-scale farms (5-100 ha) on the rise, from 20% in Kenya to more than 50% in Zambia at the moment. It is yet unclear whether these larger landholdings hold an opportunity for mechanization in farming and would improve food security. Another phenomenon that emerges from our growing insights about agricultural productivity in SSA is the need for location specific agronomic interventions, which requires data dense information processing, as elaborated Bindraban in his presentation.

In any case, productivity is the catalyser for the development of the value chain, whereby development of agro-dealer networks for inputs and processing of the output are important areas for job creation.

Based on these considerations, our discussion poses the following set of general questions:

Prem Bindraban (IFDC) on the need for precision on the African continent and innovative fertilizers for improving harvests, human health and the environment

There is little known about youth in Africa. In policy documents, neither in evaluation, there is specific information available. Gender aspects are part of collected information, but age-cohort is not asked at the moment. Data is still anecdotal. What can we do for youth?

IFDC’s 2scale programme (https://ifdc.org/2scale/) aims to set up sustainable and viable business for low income communities. The programme works along the whole value chain. Raising production and then processing and marketing the output are all elements developed in this programme. IFDC also builds agro-dealer networks, creating opportunities for business. If you recommend farmers to use certain products for raising production, there must be someone who sells the inputs and buys the output. 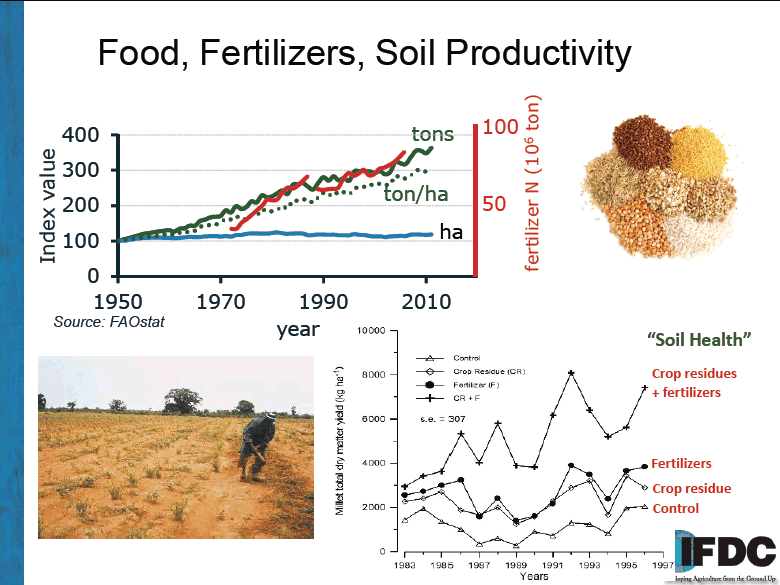 Some of what is produced on small holder farms is consumed on the farms, improving household food security, while the remainder is sold generating income. The evaluation of one project showed that about one third of the targeted income rise was not achieved because of household consumption which was however positively valued.

Fertilizers are needed for raising productivity of the soil. Poor soil fertility is more limiting than rainfall. However, that is not the whole story. Some soils are not very responsive to traditional NPK (nitrogen, phosphor, potassium) fertilizers; there are micronutrients (like manganese, sulphur, copper) that are needed for proper growth and many African soils lack these trace elements. We have to be more precise in what we put in the soil.

We also have to revive the nutritional value of crops, which has decreased since World War 2, with specific emphasis on increasing yield. Crops contain fewer trace elements that are important for humans which lead to severe health problems.. Agronomic fortification, i.e. the application of micronutrient-containing fertilizers, can help to increase the nutritional content of crops.

An additional problem with NPK is that the efficiency now is quite low, often only at around 20-30%. We lose a large portion of what we dispense on the land because it washes away. Such large losses should not occur with the micro nutrients that are necessary for nutrient value. Research is being done to develop novel fertilizers and to improve uptake of fertilizers.

Fertilizer must not be the only factor when increasing yields; rather, we should try to use less fertilizer. Especially the stock of phosphate is finite and overuse causes problems for the environment. Being wise with fertilizers means that we stop considering fertilizers as a commodity, and realize that proper use can serve multiple public goals, amongst which reducing emissions, climate change, fighting hunger, promoting better health, more resilient crops, and recycling.

The potential for bigger yields in Africa is huge, but there are constraints relating to affordability and availability of fertilizers. Logistics are not geared to transporting bulk goods to landlocked countries, for instance, which also makes fertilizers much more expensive than in Western Europe. That already urges us to be very efficient with fertilizers.

With new techniques, Controlled Release of Fertilizers is possible, also for trace elements, so that the right amount and the right kind of fertilizer is being released in the soil. Interaction with irrigation systems is possible, foliar application (via the leaves) is being done, all to make sure that plants get the right nutrients at the right time during their growth. The added costs of these specialty products should be earned back with higher yields, in principle. 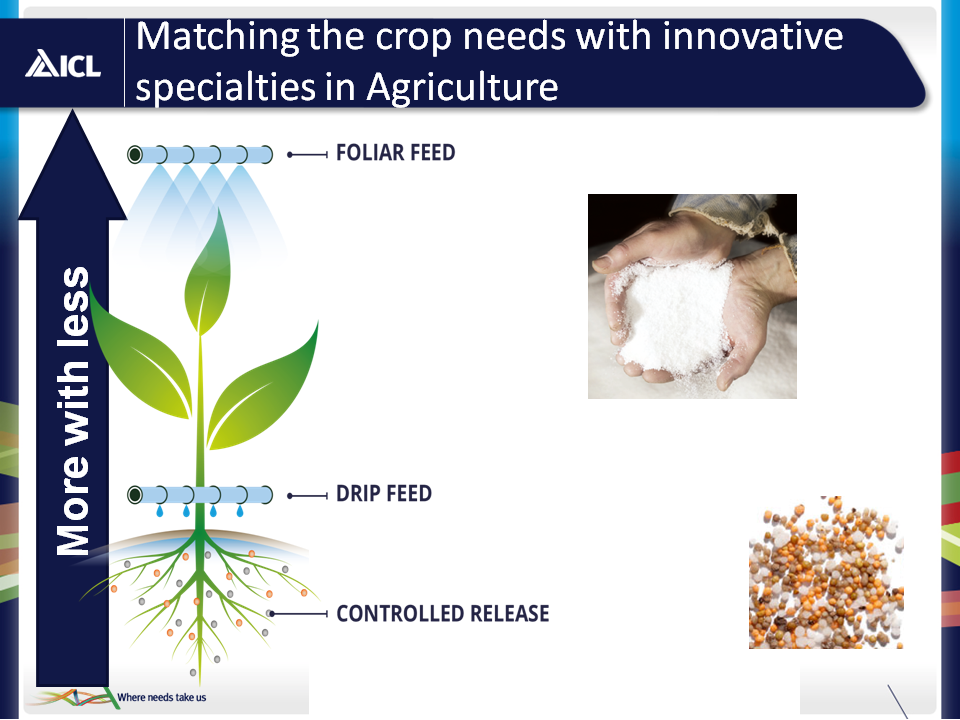 Recycling is important because rock phosphate is a scarce material – the stock is finite. It is thus important to try to win back phosphate from sewage, and try to produce nutrients from other sources, for example elephant grass from which ammonia (i.e. nitrogen fertilizer) can be produced. In Europe recycling is already developed on a larger scale, Africa can still make progress with recycling and production from alternative sources.

Peter van Erp (SoilCares) on the Soil Scanner and CropMon

SoilCares’s Soil Scanner is a sensor for soil testing at the farmer’s land. The idea behind it is to provide detailed information to farmers, and to start with the basis, the state of the soil vis-à-vis fertility and nutrients. The scanner analyzes the soil on mayor qualities: it sends the readings via a smart phone to a central computer and returns with an analysis so the farmer gets immediate advice on which fertilizers to use. The scanner does not analyse micronutrients, but based on big data we see correlations pertaining to a specific sample.

Another project is CropMon, where farmer recommendations are given based on satellite data, soil, weather information, during the growth of a crop. These services are being delivered by people who visit the farms. This could be an opportunity for youth who is interested in agro but does not have the money or the land to start up a business. Being a consultant for the services of CropMon and the Soil Scanner are options to generate youth employment.

The system that SoilCares implements around the Soil Scanner solves the problem of logistics – how to get soil to the lab – by using the ‘lab –in-the-box’ which larger farmers can use on site. Governments and NGO’s are interested in this approach of advising farmers, and also commercial parties who do already have an established network of farmers they visit. Capacity building is essential, as farmers not always realize that soil testing is essential.

That points to the necessity of, and opportunity for a layer of intermediates that can help the farmer using this data. There is little knowledge among small holders about soil issues; therefore, SoilCares started its own foundation to work on this capacity. The Dutch government initiated capacity building for farmers already years ago and that idea has to be picked up by African governments.

Is youth attracted by these high tech innovations? The high tech does not seem to be too important. A successful project in Nigeria with about 5000 youth involved in cacao growing using mycorrhizae is low-tech but highly successful. In this case, it was rather that one had to provide some money maker for the two or three years before one can harvest, which was achieved by growing maize.

More in general, only 5% of production and being a farmer involves technical knowledge like what we are discussing right now. Much more important is how to bring produce to the market and translating the information of these systems for the farmer so that he or she can act upon it.

And, it is the more experienced, slightly older and visionary farmer who picks up these higher tech developments.

Making farming sexy is not the issue – agriculture is hard work, and in SSA it often also means misery. The big question is, whether it can provide a living for people. The sexier elements are not really decisive for those already interested in the agro business. Also, we have to realise that the share of farmers in the total employment will be small. In the Netherlands and developing countries in general, agricultural production is about 2% of the economy. The current economic importance of 30-60% and labour creation of 40-90% in SSA countries is likely to decrease as well over time. However, the food value chain comprises about 10% of the overall economy in developed nations, including logistics, the processing industry, the auxiliary business, etc. and will also inherit the greatest potential for creating youth employment in Africa.

So yes, there are opportunities for younger farmers along the whole value chain that will develop with increased production and using advanced technology that helps farmers grow better crops.[/vc_column_text][/vc_column][vc_column width=”1/3″][vc_column_text]In cooperation with Prem Bindraban, IFDC