Supply what is in demand

[/vc_column_text][/vc_column][/vc_row][vc_row][vc_column width=”2/3″][vc_column_text]In the foodFIRST series of Vijverbergsessions we focus on the farmer-entrepreneur and how to enable them to compete on the urban markets for quality food. Essentially this is about producing for the demand of urban consumers. When looking at the demand side of the food system, there is a wider picture: not only agro-production, but also the processing, logistics and distribution, and retail come in the picture. What opportunities and exigencies does this yield for farmers who want to extend their business, for entrepreneurs who want to enter the food business, and for peripheral businesses.

As son of a farmer interested in how farmers connect with urban centres. His experience in Rotterdam might give some insights for how that connection can be made elsewhere. The research topics that are important are not so much different in the West or in the South.

The connection between farmers and markets in the West is characterized by oversupply, so farmers have to provide a unique experience, whereas in the South it is about the lack of income generating demand, scaling up, and low cost. However, the lessons learned apply to both. Short supply chains are essential in both cases. 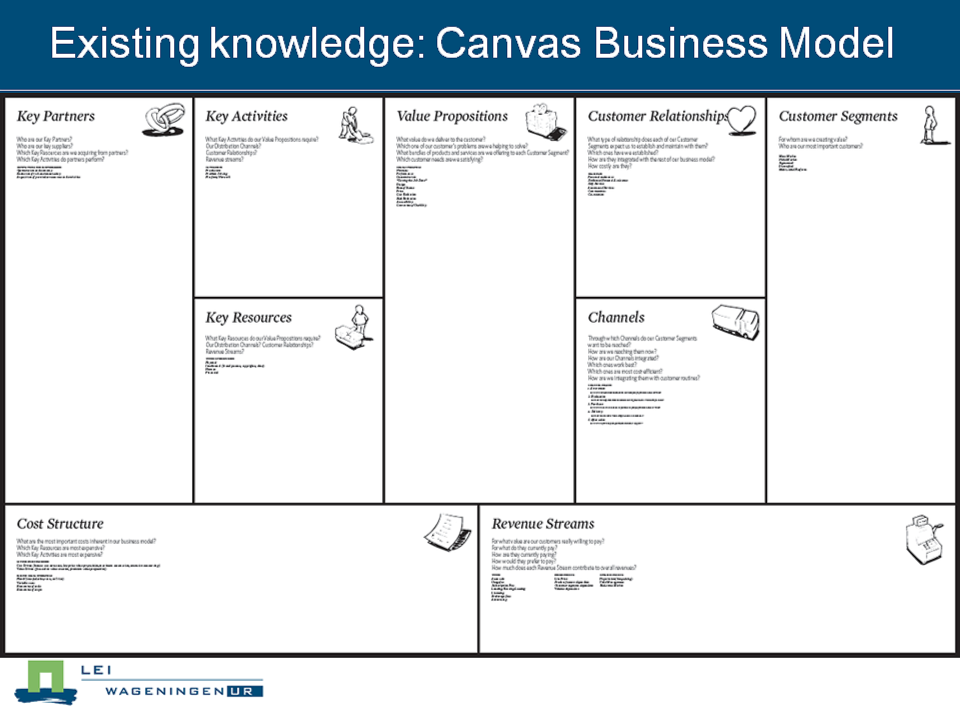 Trying to bring farmers to the market meant reversing the ‘canvas model’: start at the right, i.e., demand driven, start with the costumer segment for which you want to develop a ‘value proposition’. The problem with a supply driven approach is also that it often involves commodities traded at standardised markets which are prone to price spikes.

An example of ‘supplying what’s in demand’ is Honda. They wanted to sell motorbikes that would compete with the big Harley Davidson bikes. Their sales people were using their small mopeds, in order to cut costs, and possible dealers advised them to start selling these smaller bikes which were handy for doing groceries etc. The lesson here is: if you plan to enter new territories, do not spend much in market research, rather try out something and learn from your experience, and develop step by step.

Low prices for farmers in the Western world are not the result of the power or conspiracy of supermarkets, but are simply caused by overproduction. Supermarkets however are not a good investment anymore, there are enough alternative shops: people also buy food via the internet, for example. The retail market today is less about ‘bricks’ and more about ‘clicks’. That is also the reasoning behind the Food Hall in Rotterdam. Create unique experiences, this is the only way to compete with internet shops in the long run.

Learn from each other instead from advisors. In master classes farmers or other parties active in the supply chain can act as one another’s mentor, starting a process of mutual learning 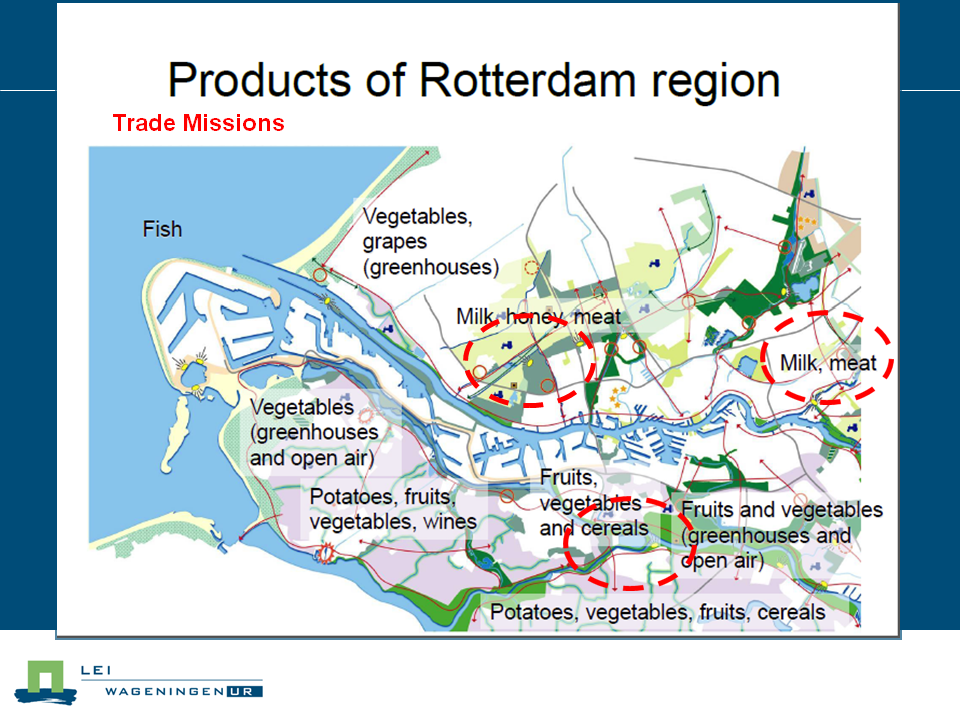 Involve local authorities, not only the actors who are directly involved in the chain. Local authorities may facilitate networking. A city such as Rotterdam is actively looking for connecting with the farmers. Silly as it may be, they organised ‘’trade missions’’ to the surrounding villages and municipalities. These missions build relevant networks and taught farmers that there was a real interest in their produce by the city.

Feeding the city needs high tech and controlled farming, and low tech in open areas. But in the end, all stands with distribution. The Netherlands is quite well organised in the food logistics; in Africa this is a challenge governments have to take up yet.

SPAR has started a project in South Africa for setting up rural hubs in order to shorten the chain from farm to (SPAR) supermarket. Their current logistic setup is that all produce is distributed from one central hub in Johannesburg. This centralisation was induced by concerns of food safety and supermarkets wanting to have more control over the chain. As a result, produce sometimes has to be transported 400km away from a farm, in order to be distributed that same distance back to a local supermarket in the town or village nearby the farm. This long haul transport has negative consequences for the availability of food and for the price. The Fresh Assembly Points (FAPs) are now being developed to have better and more diverse food for a lower price available for the (mostly) lower income households that rely on the rural SPAR supermarket. With selected supermarkets and selected farmers in relatively poor areas the model is being tested. 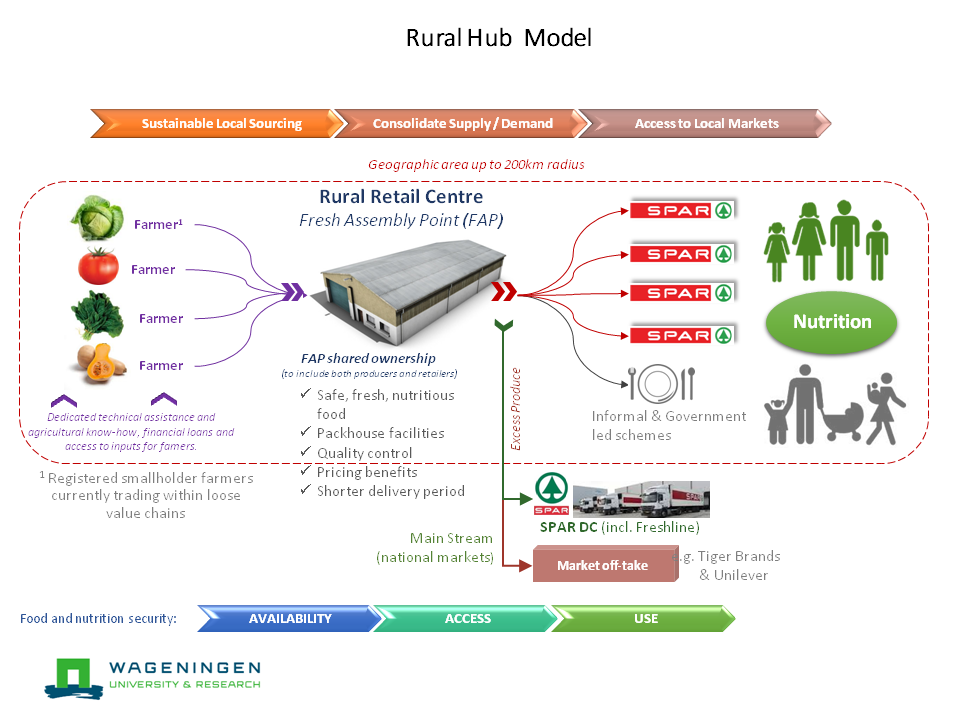 It starts with the demand in a rural Spar supermarket. The aim is to provide more diverse food, of consistent quality, and for a low price. The standard produce via the central SPAR distribution is sometimes too expensive, and what is available on the local market is irregular and often not cheap either. The FAP organises local supply that the supermarket demands: which produce in what quantity and of consistent quality. Produce delivered at the FAB might also go to the ‘fresh line’ of SPAR, or to the food industry when there is more supply than de local shops can sell. Farmers are trained in local Good Agricultural Practices and coached in meeting the FAP demands for high quality and safe food. In this way, the chain is substantially shortened: locally produced food for SPAR is distributed directly to the supermarkets in the area, instead of transported back and forth to the central distribution in Johannesburg. 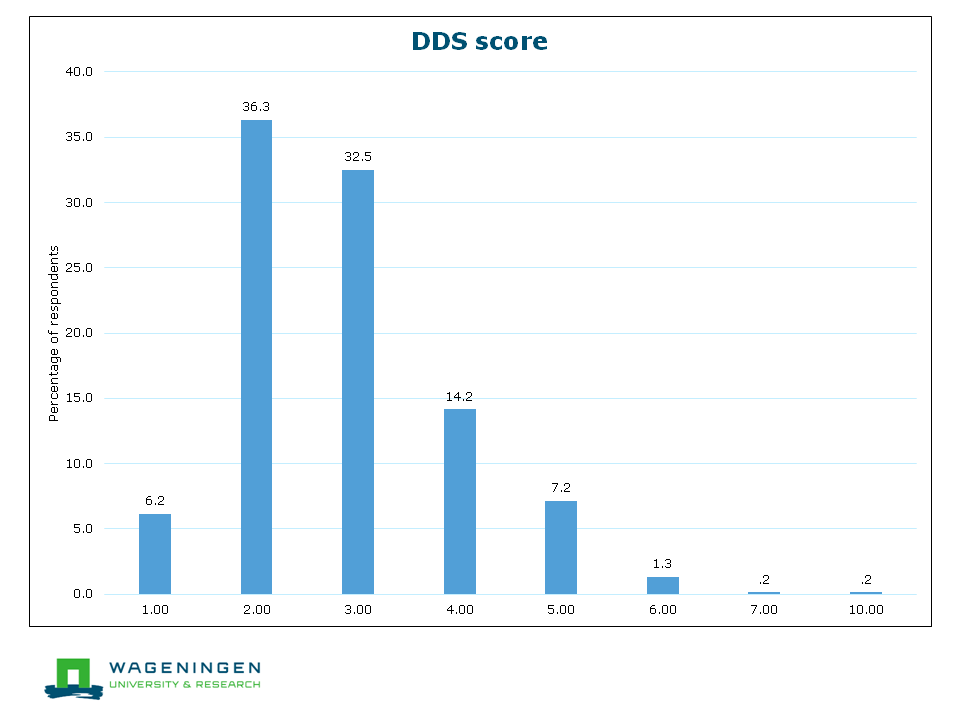 The SPAR project baseline survey among 600 female SPAR customers of reproductive age and low to very low income segments revealed that variety and quality of food is a real concern in the targeted areas. Quite a large proportion relies on average on only two to three different food types (see Dietary Diversity Score in the graph), with a low intake of vitamin A and protein rich products. The SPAR supermarket is for most households their main source of fresh vegetables. Though, about half of the rural household supplement their food supply through backyard farming.

5 mil is being invested in this project. This may be regarded as a substantial amount for a relatively small number of farmers that the project directly targets (total between 60 and 150). The goal is the promotion of rural farming and improving access to affordable nutritious food for lower income households through development of a new business model which is aimed at shortening the value chain. Local small holder farmers are trained and new distribution businesses (the FAPs) are being set up. The commitment of all project partners, including high level management in SPAR, is high, but it remains a risky experiment and requires large investments. The benefits of the shorter chain are for those farmers who supply to the FAP and adhere to local GAP standards They are not limited to farmers that have been subject to the projects’ support (training and coaching) only. Moreover, the FAP also sells to non-SPAR retailers. At the moment, there are 3 FAPs projected with eventually 20 to 50 farmers participating per FAP. In the end, the FAPs should be owned by the farmers, SPAR retailers and other key businesses.

Shorter chains do not necessarily lead to lower prices for fresh food – at least that is the experience in Rotterdam with the food hall. There are market mechanisms where healthy and clean looking vegetables can be sold for higher prices; ‘organic’ products also make good prices. With a label ‘sustainable’ for locally produced food one can undercut the price of high end and trendy ‘organic’ products. Producing higher quality without raising the prices for the targeted customers is easier in short chains.

The food processing industry provides jobs for unskilled and low skilled workers. That is an important argument for Rotterdam to invest in the food business as one of the main employment clusters (next to the port and the medical industry). The FABs in South Africa provide similar opportunities for access to the labour market. A shorter chain contributes to making farming again an attractive option for young people, though this effect is more clearly visible in The Netherlands; the experience in South Africa is that it is hard to get people interested and capacitated to farm.

Food safety is important for a supermarket, but is not a big concern at local markets. For farmers it thus makes a difference for whom they are producing. In South Africa 80% of the food is produced by the 38.000 or so commercial farmers. For whom is produced can also shift: in Kenya smallholders pulled out of producing string beans and sugar snaps for the export when food regulations for export to Europe became more complex.

Short chains are part of a movement in which the local market gains more importance over the global market. Urbanization leads to more organized retail and less open market retail, but regional systems will keep their place and function for the food system. Also in a globalized Dutch system the locally oriented auction in Zaltbommel exist next to the global one in Barendrecht.

Likewise, the FAB is part of the urban food system, connecting the urban centre with its rural surroundings.

Besides the availability or volumes of food, variety is of food is an important aspect of a healthy diet. People are averaging on two food groups for their meals. Knowledge of how to cook and what one can do with the produce which is in the shop is also important. In promoting healthier diets one should not target the lower classes only. The middle class worries more about food safety but is also a first mover for variations in the diet with lower classes following. ‘Keeping up with the Joneses’ is the mechanism that works with them when disseminating healthier habits.[/vc_column_text][vc_column_text]foodFIRST theme 2016/17 “The African future is for young, well educated, market oriented and organized farmer-entrepreneurs” — more to this theme on: A policy paradigm for rural development cooperation in Africa, Vijverbergsession of 2 December 2015.[/vc_column_text][/vc_column][vc_column width=”1/3″][vc_column_text]With Jan-Willem van der Schans (WUR) on Linking farmers and Supermarkets and Marlene Roefs (WUR): SPAR Rural Hubs initiative.