The cooperative: vehicle for access to finance and markets for smallholders? Cooperatives are vehicles to help less powerful to accomplish their goals and make a fist: together you stand stronger in an open and global market. Cooperatives rely on trust between the partners, so can they function in low trust societies? Being a member of a cooperative does not always guarantee that one gets the highest price; cooperatives’ perspectives are for the longer term. And more generally, what are the circumstances that influence the success of a cooperative?

How can cooperatives contribute to increased access to finance and markets of smallholder producers in developing countries? Why are cooperative models, based on trust between economic players, successful in certain countries and contexts and less successful in others? What are recent experiences and realistic perspectives on supporting these models? These were the questions that were central in the discussion. A topical theme also because 2012 has been declared ‘Year of the Cooperatives’ by the United Nations.

About 175 people from governments, cooperatives, business, NGOs, and students attended the conference in the Innovatoren at the Floriade, Venlo.

In his opening words, Kees Wantenaar, chairman of Agri-ProFocus summarized the two sides of cooperatives: on the one hand, it is ‘together one is stronger’, one has a better position in an open and global market. But on the other hand, the mutual trust in a cooperative is can be jeopardized because one does not always get the highest price for one’s produce when sold via cooperatives.

In light of the current food problematic (feeding 9 billion in 2050, scarcity of food, energy, and land) we have to double production, link small holders to global markets, and make investment in developing countries possible. A vast majority of farmers worldwide are smallholders (85% has less than 2 ha of land, 97% less than 10 ha). Small farmers face problems such as higher transaction costs for getting food to the market; problematic quality standards and lack of schooling; aging and less influx due to decreasing popularity as a job.
Cooperatives are a viable way ahead because they connect economic viability with social responsibility. A cooperative is simply a business, organised by people (not by capital), and it is done by the people involved, they do not need to wait for others to start. 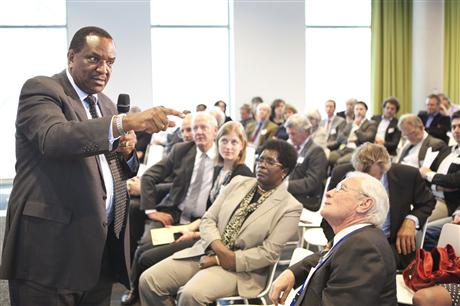 Africa is a continent characterised by food insecurity: production has gone down; distribution is a problem (available food is in the wrong places); what is produced, is too much of the same kind; there is an overdependence on donor food.
Poverty affects the ability to produce food for the right markets. Natural hazards limit production. Conflicts and wars, within and between countries, disturb production and distribution. And a lack of knowledge and lack of infrastructure pretty much complete the litany of reasons why the picture for Africa is so bleak.
Governments have to make the right policies. At least there is currently an initial agreement between African governments to invest 10% of the BNP into agriculture. However, this level of investments has not yet been reached.
The African farmers are less educated and have less access to financing compared to other farmers. In order to be more productive, they need more incentives then they currently have. Seed and fertilizer programmes are in place, but the means to continue these are lacking.
In Kenya about 30% of the dairy farms are organised in cooperatives. The sector is so big that it justifies a minister of cooperatives. Cooperatives are a viable middle way now communism has collapsed and Wall Street capitalism is in the process of collapsing. Cooperatives have an important role in training and educating farmers, and for access to financing. They offer support to farmers at the grass roots level. The role of the government vis-à-vis cooperatives is to create the right environment where cooperatives can become stronger, and to act as an auditor. The government does not own the movement; cooperatives are independent private sector actors.

Cooperatives play an important role in the development of Africa, and they are important for donor countries because of the stabilizing effect they have. During the bank crisis, we saw a run on credit unions and cooperative banks such as Rabo.
Food security is one focus of the Dutch government. There is a need to reform development cooperation because capital flows are much less predominantly North-South. The emphasis in development relations has further on shifted to more responsibilities for all partners involved. In that context, cooperatives are crucial in empowering persons.

Are cooperatives the key to success? In any case not the guarantee; in the end, their success depends also on the market. And one has to invest in good people (members) and qualified managers.
What can we learn from Kenya? Reduce the involvement of the government, set up cooperatives as independent institutions. And realise that one has power in the market to get better deals — as Kenya did with coffee prices. 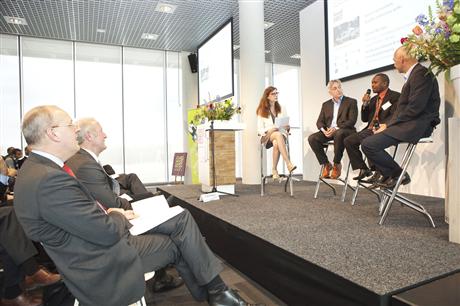 A problem for a cooperative is that sometimes members pass by the cooperative when they can get a higher price outside when in need for more income. This is a problem in Kenya; it has been a problem in The Netherlands. Cooperatives pass through the same phases and meet the same problems when developing. In the end, the benefits of a cooperative are the better service, and the possible advances on money and credit.

Experiences from Mali and The Netherlands: The experience with how cooperatives develop currently in Mali, fits very well with how cooperatives developed about 100 years ago in The Netherlands. Initiatives to form cooperatives are taken by local leaders. Informal relations (family, friends) are characteristic for cooperatives during the formative years. Solidarity often has priority over formal rules in these early phases. In a later phase, relations become more formal (this latter point emphasized by Minister Nyagah in the discussion). Cooperatives grow out of personal networks with as leading values trust, profit and solidarity.

The reality of cooperatives is that they cannot reach all the poor. Often, cooperatives work in isolation; they do not take into account other stakeholders.
Why is it that cooperatives pass by the poorest of the poor? For one, the poorest of the poor cannot join a cooperative because they have no collateral. Then, the risk of giving them credit is too high, and the overhead is too high in relation to the small accounts they would need. Micro financing is the only solution for these people to invest in their business. And this access to credit can reduce their poverty successfully. In contrast to cooperatives, micro financing in this way benefits the whole of the community, not only the members.
Micro financing meets two problems in order to be able to keep providing its services: a financial, and a political back up. Arthacharya, Mr. Melâ??s organisation, is now backed by a cooperative bank (an Indian subsidiary of Rabobank), in order to strengthen its position and continue its services.
Governments are often negative about micro financing: it empowers the poorest of the poor, after all. NGOs that back up the micro financing organisation can alter this attitude.

Rabobank holds on to some strict guidelines when backing up initiatives such as Arthacharya, among others: no lending without saving; transparent governance; a functioning financial reporting system; embedding in local society; no market disturbances to be caused; independent from money freely provided by NGOs.

A cooperative is a set of actors, it is a culture. The actors involved comprise the government, which should support and keep itself at a distance; the cooperative and its members itself; the cooperation of cooperatives, to make a fist against other (commercial) players in the world market.
Good management and moral leadership are important for cooperatives. What are the goals of the cooperative, what are the addressees, whom are they representing? A question left at the end of this conference is whether cooperatives can be important for other sectors than agriculture. It was alluded to when talking about the financial crisis. It is something to be explored further.[/vc_column_text][/vc_column][vc_column width=”1/3″][vc_column_text]

This conference was organized together with Agri-ProFocus